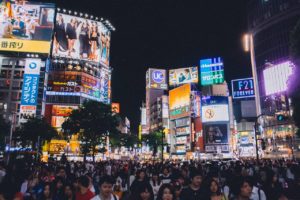 The trade agreement is the biggest ever negotiated by the EU and will create an open trade zone covering over 600 million people.

President of the European Commission Jean-Claude Juncker said: "The document we signed today is much more than a trade agreement. It is of course a tool that will create opportunities for our companies, our workers and our citizens and that will boost the European and Japanese economies. But it is also a statement. For its content, its scope and also its timing. It is a statement by two likeminded partners that together represent nearly a third of the world's GDP and reiterate their commitment to uphold the highest standards in areas such as labour, safety, environmental or consumer protection. And what we're saying is that we believe in open, fair and rules-based trade. What we are saying is that a trade agreement is not a zero sum game, but a win-win for the involved parties. This agreement will bring tangible benefits to both sides and at the same time safeguard each other's sensitivities."

Cecilia Malmström, Commissioner for Trade, said: "Together with Japan, we are sending a strong signal to the world that two of its biggest economies still believe in open trade, opposing both unilateralism and protectionism. The economic benefits of this agreement are clear. By removing billions of euros of duties, simplifying customs procedures and tackling behind-the-border barriers to trade, it will offer opportunities for companies on both sides to boost their exports and expand their business. The European agriculture sector in particular has something to celebrate, with access to the enormous Japanese market and protection for over 200 distinctive food and drinks like Champagne and Parma ham. I now call on the European Parliament to approve this agreement quickly so that firms, citizens and farmers can reap the benefits as soon as possible."

The agreement will remove the vast majority of the €1 billion of duties paid annually by EU companies exporting to Japan, and has led to the removal of a number of long-standing regulatory barriers, for example on cars. It will also open up the Japanese market of 127 million consumers to key EU agricultural exports and will increase EU export opportunities in a range of other sectors.

The Economic Partnership Agreement will also in addition strengthen cooperation between Europe and Japan in a range of areas, reaffirm their shared commitment to sustainable development, and include for the first time a specific commitment to the Paris climate agreement.

The key parts of the agreement

With regards to agricultural exports from the EU, the agreement will, in particular:

- scrap Japanese duties on many cheeses such as Gouda and Cheddar (which currently are at 29.8%) as well as on wine exports (currently at 15% on average);
- allow the EU to increase its beef exports to Japan substantially, while on pork there will be duty-free trade in processed meat and almost duty-free trade for fresh meat;
- ensure the protection in Japan of more than 200 high-quality European agricultural products, so called Geographical Indications (GIs), and the protection of a selection of Japanese GIs in the EU.

- guarantees EU companies access to the large procurement markets of 48 large Japanese cities, and removes obstacles to procurement in the economically important railway sector at national level;
- addresses specific sensitivities in the EU, for instance in the automotive sector, with transition periods of up to 7 years before customs duties are eliminated.

Last month, the Commission moreover published EU-Japan trade in your town, an interactive map showing towns and cities around Europe that export to Japan. For example, Cork in Ireland ships pharmaceuticals, dairy products and chemicals, while the town of Páty in Hungary sends pork, self-checkout terminals and manicure products. The tool includes infographics for each EU country, detailing the number of exporting companies, the number of jobs supported by exports to Japan, a list of products exported from each Member State, and other import/export statistics.

The agreement is now awaiting ratification by the European Parliament and the Japanese Diet following which it could enter into force in 2019. 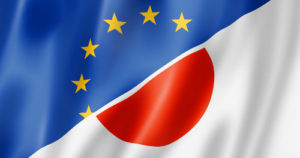 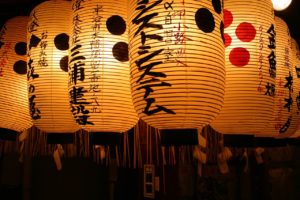